Excerpt from the Introduction to “There’s a Moose in the Guard House”:

Didja ever hear ‘bout…, did I ever tell ya ‘bout…, or ya ain’t gonna believe this s*#*t, but… We’ve all heard the typical stories that start this way. During the years I spent leading, directing, managing, and supervising operations in both the civilian and military arenas I read volumes of literature on the art of leadership and management. Each undertaking lead me through an accounting of situations and problems which were not remotely related to the problems and situations I found my employees getting into. While I was in the service the literature related fairly well—most of it being written to be military specific. Upon moving into the civilian arena, I could never find logic and advice that dealt specifically with personnel and organizations at the level that would benefit my situation. I often came away from the experience with a distaste for what I had just consumed.

In almost every publication the case studies felt contrived. I had never met anybody that had these sort of problems, even remotely. I also found that most of those providing these observations were, for the most part, academic types that had never worked one day in a real industry—not one. What will follow is not meant to be a knock on academics; they have certain skills that are vitally important to the learning environment, but they inhabit a distance that is vitally important to true objectivity. It’s that the recommendations coming from the studies I read were usually laundry lists of the same guidance that I received in college classes, training sessions, and seminars. I really wasn’t looking for more worn out jargon.

I started the search for good advice early in my career.

My initial assignment found me assigned to one of the two separate infantry brigades in Alaska with the primary mission of protecting the two Air Force bases from the Red Bear (or the Soviet Union). One of these bases was outside of Anchorage and the other up near Fairbanks. The mission was taken very seriously as the entire state of Alaska is well within striking distance of Russia’s right coast. Several times during my tenure there, we were reminded of this fact very clearly.

I had inherited an organization that was wrought with bad apples, bad practices, and an even worse reputation. It was about this time that our Brigade Commander, Colonel John A. Bender, provided each officer in the Brigade with a copy of “Guidelines for the Commander” by General Bruce C. Clark, The Pentagon, (6 Jan 1972). I pored over this publication and the general tone of the book so captured my attention that I set down a portion of it (calligraphy style) and hung it next to the door exiting my office so everybody could see it on their way out, but primarily to remind me of what direction in my leadership actions I wanted to take.

My original document was titled LT Hatfield’s Laws. Over time, I added a law here and a law there. The initial law was a summarization of Gen Clark’s guidelines: Truth, Faith and Confidence. Gen Clark advised commanders to be “honest, just, and fair… keep his men informed at all times…above all, set the proper example…men will do instinctively what they have been in the habit of doing in training.” A great deal of his advice was derived from the teachings of Baron von Steuben at Valley Forge and published by the Continental Congress. Nevertheless, it still applies just as much now as it did then.

I determined that I would tell my men the “Truth,” set such an example so they would have “Faith” in my leadership and conduct training that produced a level of “Confidence” in their abilities to prevent any second guessing in their activities and operations. Before you begin to think that this was a “beamed down from above” insight, let me clear some air. The bar for me setting a good example was not established at a great height—the two lieutenants preceding me as platoon leader had both been relieved from the position I was now appointed (sorta like catching a bridal bouquet with both hands tied behind my back). I wouldn’t have to be outstanding to overcome their records. But, I was determined to try.

Very soon I was reworking the document. Adding the second law: Amateurs teach amateurs to be amateurs. I was determined that my people were not going to be the butt of jokes at the officers’ calls any longer. My goal was to establish a degree of professionalism that was unprecedented within the command. At this time, the Vietnam conflict was still being contested and our staffing was fairly low—routinely residing close to or just below the 50% level. Officers in my grade were pulling extra duty at the rate of once a week and about every other weekend. As a jab at the situation of myself and others like me, I added the third law: You can’t overwork me, but you can hinder the quality of my product.

As a new Law came to mind, I would commit it to paper and hang it off the rear of that frame hanging on the wall. Periodically, I would review the hanging paper and consider the proposed addition, insuring it had stood the test of time and belonged on the front with those that had. The fourth law: When Leaders don’t set priorities, Followers do! Came to mind after returning from a major field training exercise in the panhandle of Florida. Coincidentally, the fifth law: Bad news only gets worse with age was moved to the front after the same exercise—a lot of learning opportunities took place in Florida during that particular trip. “Bad News” had been hanging on the back side of the frame for quite a while—the time for its move to the front had now come.

Eventually the group of Laws became what is today’s five. Each Law has at least one “story” attached to it—most have several. I will get to each as the appropriate time and place present themselves.

During discussions and in particularly story telling I would point out the particular Law that applied—soon, most every supervisor was reminding me of applicable laws when the opportunity was appropriate.

Upon leaving the army, the three laws and their title was changed to become Howard’s Laws, the same laws that hang on my wall today. 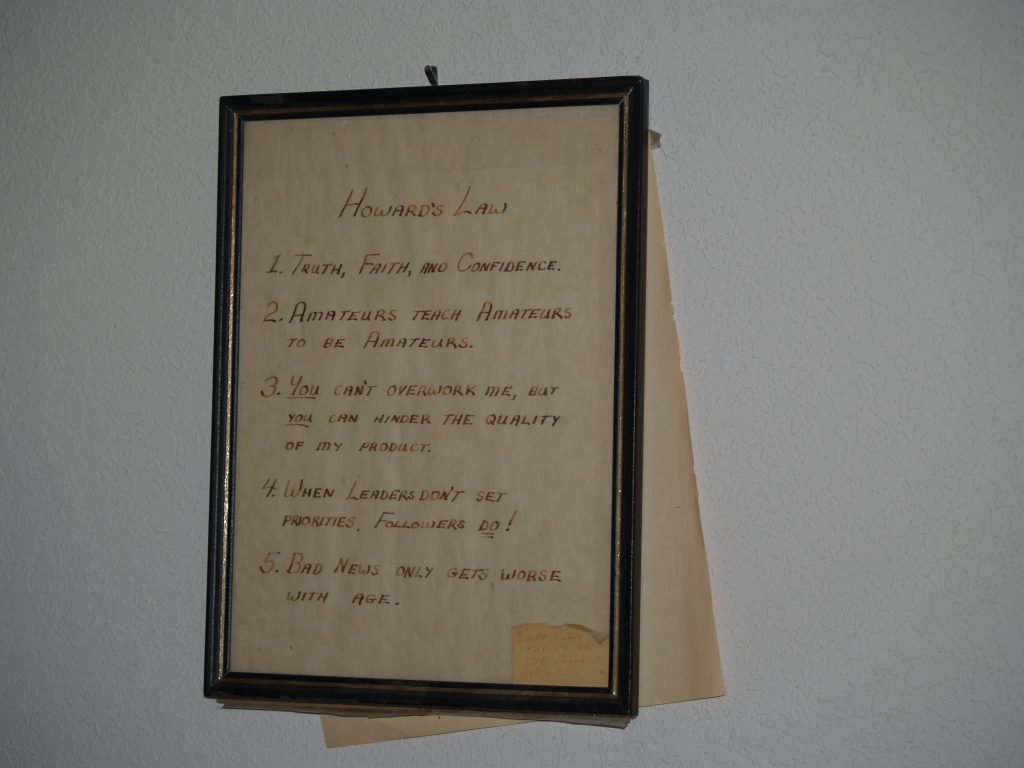 Howard’s Law hanging on the wall adjacent to my desk.

Proposed Laws are on the askewed page hanging from behind.

Check out the “About the Book” page for an outline of adventures and takeaways.